Decarbonizing the built environment – A materials and certification perspective 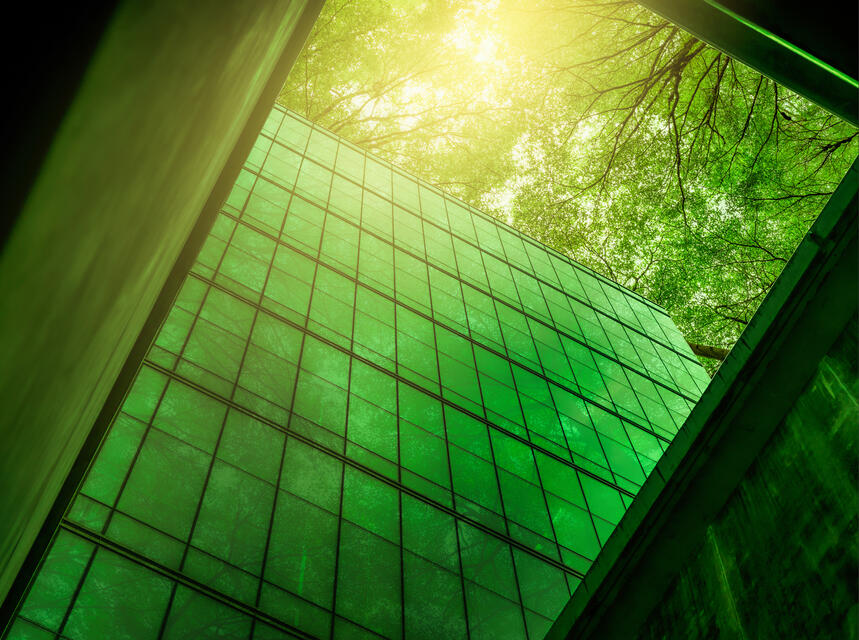 The built environment contributes about 25 per cent of global greenhouse gas emissions. It is estimated that to reach the 2050 goal of net-zero, the built environment industry will have to decar­bonise three times faster over the next 30 years in comparison to the previous 30 years. Yet even this level of change will be insufficient to keep the global increase to 1.5 degrees celsius.

In Australia, it is estimated that reducing embodied carbon in commercial and residen­tial buildings by ten per cent between now and 2050 will lead to an elimination of at least 63 megatonnes of emissions. Recent changes to the Green Building Council of Australia's (GBCA) Green Star® green buildings rating tool have, for the first time in Australia, focused the industry's major players on embodied carbon emissions associated with materials The indus­try concrete goals around decarbonising the 'up-front' emissions of five and six star certified buildings have been set with a 2050 goal of net-zero carbon buildings, both from up-front and operational emissions standpoints. This article discusses decarbonisation from the aspect of up-front emissions of materials.

The obvious question to ask is: how likely is it the industry will be able to achieve the objective of reducing up-front carbon emissions levels to net-zero? This question assumes that material processing and building operations make up a significant chunk – about 95 per cent – of these emissions. For the industry to make even a mod­est dent in emissions, substantial change and innovation will be needed in what is generally considered a highly risk-averse industry.

Decarbonisation from the material and embod­ied carbon perspective means taking on unprec­edented innovation challenges, as well as changes to processes and supply-chain deci­sion making. One of the major questions this begs is: on what basis are decisions necessary to drive change in the correct direction made without generating unintentional consequences (i.e., while driving carbon emissions down, unin­tentionally increasing other chemical pollutants or water consumption)?

One tool that can enable both innovation and responsible supply chain decision-making is the study of Life Cycle Assessment (LCA). LCA is a tool that allows for the estimation of all impacts, including carbon emissions, for building mate­rials beginning with the raw material extraction phase, through manufacturing, packaging, and transport, on to fate of the product at the end of its initial 'life.'

The analysis involved in LCA can be used internally by product manufacturers to identify hotspots in impacts, including carbon emis­sions within the supply chain. It can also inform decisions on how best to reduce the carbon emission intensity of specific hotspots.

LCA studies generate data that quantifies impacts across a wide range of indicators, and when used as a carbon hot-spotting tool, sup­port decision-making to incorporate innovative low carbon ingredients or processes. They also assist, where information is available, in choos­ing specific lower carbon alternative compo­nents, ingredients and processes. In totality, all these components contribute to what has been previously known as "embodied carbon" and, as indicated, is now described as 'up-front car­bon' in the GBCA's Green Star 'Buildings' rating tool. Decarbonising buildings requires low car­bon materials. Both manufacturers and project need to start the process of decarbonising sup­ply chains using LCA.

LCA generates volumes of complex 'inventory' data to develop the final set of indicators that include the total up-front carbon emissions data. Much of this LCA inventory data is highly confidential and will never be released, even to the client involved, because it often involves the direct provision of confidential information from third-party suppliers under non-disclosure agreements. Ergo, the ability to communicate the results of the LCA depends on summarised 'rolled-up' and de-identified data. This is pub­lished in standardised formats, and mandatory minimum content, according to various interna­tional standards.

The GBCA and building materials industry locally has adopted EN 15804 +A2: Sustain­ability of construction works – Environmental Product Declarations – Core rules for the prod­uct category of construction products, as the accepted standard for the publication of these summary LCA reports or 'EPDs'. This is in order to maximise potential comparability of products from different manufacturers and LCA providers.

EPDs are the starting point that allow various stakeholders – including product manufactur­ers, architects, specifiers, and developers – to review and discuss how they can contribute to decarbonising the built environment with a view to meeting emissions targets. They are, in effect, the 'language' via which manufactur­ers communicate to the rest of the industry the environmental and carbon profile of their prod­ucts. They are also the tools with which archi­tects, designers, engineers, builders and their project LCA consultants can drive the decar­bonisation process by preferred low carbon product, and materials selection based on the data within EPDs. This is achieved not merely by the provision of an EPD in itself, as was the case up until the implementation of GBCA's new 'building tool' in December 2021. The building tool itself is only step one in the ratchetting-up of the decarbonisation process by Green Star between now and 2050. The current version of the rating tool requires that all certified buildings have at least ten per cent less upfront carbon emissions compared to a standard building from benchmark materials.

GBCA has also established a Climate Positive Pathway for Green Star buildings. Its mini­mum expectations are that Six Star buildings will immediately, and Five Star buildings will from January 2023, meet the Pathway require­ments for a 20 per cent upfront carbon emis­sions reduction. From 2030, Six Star buildings will be required to reduce upfront emissions by 40 per cent, and by 2050 all certified buildings will be required to reduce upfront emissions by the same 40 per cent. This is no simple task, given Green Star rules exclude the potential for including biogenic carbon (from biologically based materials like wood and wood-fibre, bam­boo etc.). Such materials are frequently included preferentially. They are usually net carbon sinks, calculated to reduce upfront carbon in struc­tures. In so doing, they appear to be giving preference to existing high carbon materials like steel and concrete. This arguably pushes manu­facturers towards low emission energy sources, or to purchase recognised carbon offsets, not­withstanding they already have biogenic carbon sink potential in their products.

From a calculation point of view in Green Star, an 'Upfront Carbon Emissions Calculator' enables a project team to calculate their embodied car­bon impacts from key and generic products, and materials used in the building's construction. It is a simple calculator for those not doing a whole-of-project LCA study and is measured in kgCO2e.

An alternative approach is prescribed within the whole-of-project 'Life Cycle Impacts' credit that requires a project to capture LCA data from var­ious sources. These include preferably product specific EPDs, but also less preferred generic or industry-average data based EPDs. It then com­pares the building and its specified products and materials against a reference building modelled by the project team using nominated bench­mark materials. This is a much more complex process and necessitates the use of EPDs from manufacturers to allow design teams to select upfront carbon emissions, preferred products, and materials. Consequently, it is this specific credit that drives the major increase in demand for EPDs from manufacturers and suppliers, typ­ically for use on larger projects.

Credit Achievement requires fit-out upfront car­bon emissions to be calculated for at least ten per cent of tenanted space by Nett Lettable Area (NLA) to be quantified and fully offset. It is also mandated that building owners require ten­ants to use low global warming potential (GWP) refrigerants, or procure offsets for quantified high GWP refrigerant leakages. The Exceptional Performance level of the credit requires that upfront carbon emissions be quantified for the fit-out of at least 40 per cent of the tenanted space (by NLA) and fully offset.

Included in the tenant upfront carbon emissions are those from the manufacturing, transport, and installation of all fit-out related items. This includes furniture, tenant installed supplemen­tary systems, finishes and fittings.

As alluded to in a recent industry report, embod­ied carbon will be responsible for over 80 per cent of Australia's built environment emissions by 2050 if steps are not taken by all stakeholders.

In examining the Carbon Emissions Pathway and the growing uptake of Green Star, partic­ularly in light of the commitment to use Green Star by the Queensland Government for the 2032 Olympic Games venues, there is little doubt that the building industry at large can unlock the potential to decarbonise the built environment by increasing the use of GBCA's Green Star®, and encouraging the use of tools such as LCA and EPDs for decision-making across all sectors of the industry.

It scarcely needs re-stating that the conse­quences of not gaining rapid control of, and dramatically reducing humanity's carbon foot­print, locally and globally, will be catastrophic.

« 4/9 HAVE YOUR SAY on the future of green textiles!

How will you use GreenTag?

Make your product stand out, unlock the barriers to major markets.

Get Global GreenTag certification to stand out as a leader, differentiate your product from the pack and win in the rapidly expanding green marketplace.

Create your own healthy, sustainable home, interiors and lifestyle.

Discover our work with the Beauty & Personal, Cleaning and Building & Interiors industries or find out more about GreenTag.

Global GreenTag certified products pass the world's toughest standards to protect you, and your family's health and safety, minimise your impact on our finite planet and put the power of selection back in your hands.

Save time and money selecting products that deliver and protect your business from risk.